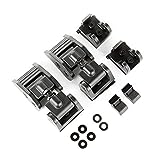 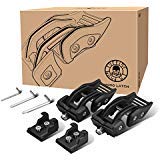 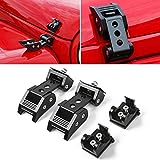 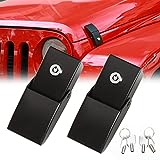 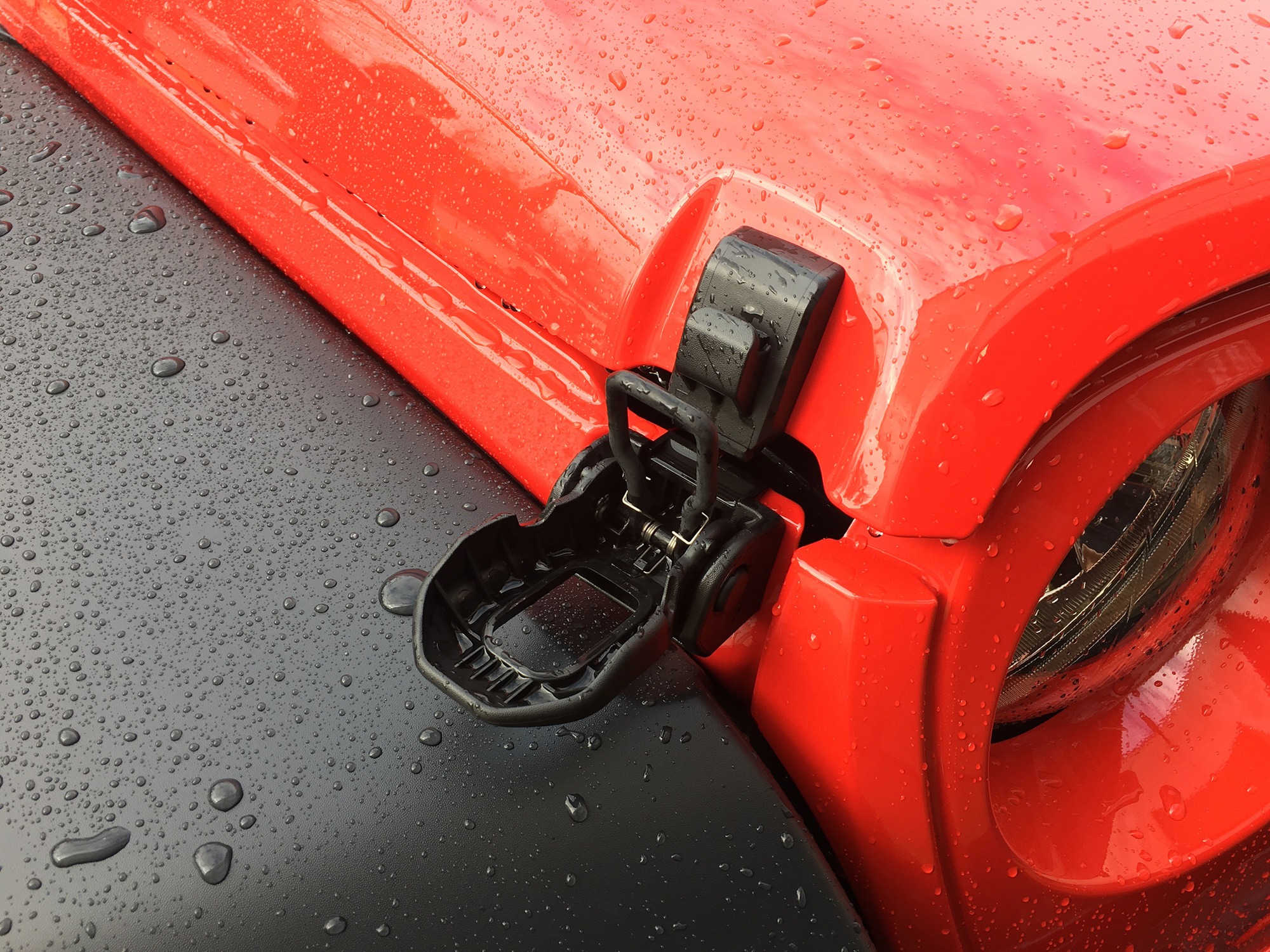 A hood latch (also referred to as “hood catch”) is a special fastener that holds the hood of a vehicle and allows locking and unlocking. Jeeps use different hood latches, so when looking for a replacement, make sure you get the one that is appropriate for your vehicle. In this review, we’ll take a look at Jeep Wrangler hood latch locks.

While you are driving your Jeep off-road, the hood may lift up to 3-6 inches. Hood latches provide both safety and convenience by keeping your hood from moving, shaking, or collapsing against the windshield. Obviously, they wear and degrade over time, causing the hood to make strange noises. Therefore, latches require replacement. The ones offered by Jeep, on the other hand, are expensive but don’t offer anything special in terms of quality.

To that end, we’ve tested many third-party brand hood latches designed for the Jeep Wrangler that can provide even better quality than the OEM. This review will provide you with all of the necessary information about our top picks to find the most suitable Jeep Wrangler locking hood latch at a reasonable price.

The Rugged Ridge 11210.17 latches are available in textured black, sleek black, and silver finishes. The coating is of high quality and will not be damaged by exposure to the environment. Besides, this finish is not just visually appealing but also helps prevent rusting.

After inspecting these latches, I was pleasantly surprised by their quality. They are made of solid, high-quality aluminum that exudes durability. I have no doubt that they can withstand harsh weather conditions and last for many years. The latches perform their main function very well. The hood stays securely closed at the highest speed and even in high winds.

This kit fits the 2007-2018 Jeep Wrangler models. The latches ensure a direct fit by being perfectly proportional to the Wrangler’s hood, eliminating fluttering and rattling.

During installation, attaching each Jeep Wrangler TJ hood latch took me no more than half an hour (the stainless steel hardware comes as a part of a kit). The installation is simple and requires only basic hand tools. Besides, the mounting points match factory hardware. The only problem is that you will have to remove the front grill to install the lower portions of the latches.

These latches are not cheap but are more durable than the original Jeep Wrangler latches, which, for example, are not protected against rust, unlike the Rugged Ridge latches.

These heavy-duty latches are painted black and made of die-cast electroplated stainless steel and aluminum alloy. They are resistant to heat, sun rays, water, and scratches, and are very durable so they are not easily damaged and will last for years to come.

The latches are designed to fit the 2007-2018 Jeep Wrangler JK and use the same mounting points as original ones, so you won’t have to drill new holes in your Jeep’s hood. It took me no more than 40 minutes to get them installed. The necessary hardware is added to the kit. There are 3 Allen wrenches for mounting, but if you don’t have any, you can use the factory nuts because they’re easier to use, especially if you remove the grill first.

While testing these latches, I was able to conclude that the windy weather isn’t a problem for them. Thanks to their tight fit, they hold the hood firmly in place and do not allow it to wobble. The latches are affordably priced but still stronger than the original ones and can be considered as a good upgrade.

These Topfire latches feature an aluminum alloy construction with a matte black finish. This model works as a 2013 Jeep Wrangler hood latch and is also suitable for any Jeep Wrangler JK/JKU, manufactured between 2007 and 2018. The latches are intended to be a direct replacement for the factory ones and do not require any additional holes to be drilled.

They come with stainless steel hardware for easy installation which includes 2 pivots, 4 rubber pads that go between the hood and the fenders to prevent metal-to-metal contact, and 3 wrench tools. If you follow the provided instructions with pictures, the installation will take no more than 35 minutes.

The latches are resistant to shocks, scratches, and rust, and feel robust and solid. They eliminate the possibility of hood wobble, withstand difficult road conditions and keep the hood closed on uneven surfaces.

These catches have a unique, unusual curved shape that is quite effective, so don’t expect unpleasant surprises. Although they are among the cheapest hood latches for Jeep Wrangler, they are more durable than the OEM ones.

How to fix a hood latch that doesn’t lock?

1. Inspect the latch mechanism. In case there’s dirt or debris piled up, remove it and lubricate the latch parts (both of the car and on the hood).
2. Inspect the hood. Upon driving on a bad road or after an accident, the rubber parts between the hood and the car body might get recessed or pop out not letting the hood go far enough to lock. The modified geometry of the hood / car might also influence the lock position. In this case, it needs alignment with the hood’s part of the lock.
3. If the problem is inside the latch mechanism (e.g. a spring doesn’t return the lock into the closed position), try to readjust it manually (use a screwdriver, metal tongs, or other tools at hand) to put it in a lock fixing position. If the problem persists, visit the workshop.

How to adjust a hood latch?

1. Ensure the hood is propped reliably, and explore its part of the latch. Find the bolts keeping it in place.
2. Loosen the fixation bolts just a bit, until you can move the latch around.
3. Hover the latch left and right to find the fitting position. It has to be aligned with the hood opening.
4. Lower the hood stops by loosening the nuts that hold them in place.
5. Align the hood latch vertically, so that it would come straight between the fenders when the hood is closed.
6. Tighten the latch fixing bolts, get the hood stops up and tighten them in place.

How does a hood latch work?

The hood latches are designed individually for each auto brand and even for the specific models. However, the general principle of your Jeep Wrangler hood latch work wouldn’t differ significantly from that on the Toyota Yaris.

The hood latch comprises of the cable running from the front part of the hood inside the car. On the hood’s end, it’s connected to a spring with a hook or a similar mechanism, fixed on the lock’s trigger. On the “driver’s” end, the cable is linked to a plastic handle. Pulling at the handle makes the cable recess and stretch the spring, the latter moving the trigger and releasing the hood lock. There’s also a safety latch (to be moved manually) not letting the hood fly up at once.